Hello!! Welcome back to my blog. If you have followed me from my previous series, I am still covering on my trip to Bangkok, Thailand back in 2008 (yes… way back then! A delayed posting. =P )

Today I will cover on my trip along Chao Phraya River which passes through Bangkok city.

A brief intro before I start my journey. Chao Phraya is one of the major rivers in Thailand with its low alluvial plains. Along the river, there a lots of settlements such as Nakhon Sawan, Uthai Thani, Chainat, Singburi, Ang Thong, Ayutthaya, Pathum Thani, Nonthaburi, Bangkok and Samut.  These cities are among the most historically significant and densely populated settlements of Thailand because of their access to the waterway.

In Bangkok, the Chao Phraya is a major transportation gateway for a vast network of river buses, cross-river ferries and water taxis, also known as longtails. There are more than 15 boat lines operate on the rivers and canals of the city, including commuter lines which you can choose from which I will be taking as one of the transport around the river. =)

Ok… let’s get going. Starting off, I hopped on to the Bangkok Skytrain to the Saphan Taksin station (on Shilon Line) in Sathorn District to catch the river bus on Chao Phraya river. 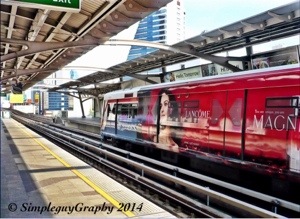 From the Saphan Taksin station, it was a few minutes walk to the Sathorn Pier. Easy walk. =)

A view from the pier to catch the Sathorn Pier or the Central Pier of the 21km Chao Phraya River Express Boat route.

The pier is right under the bridge of Sathon Road. 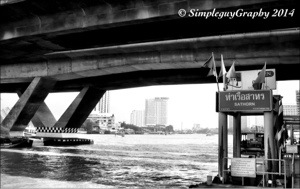 One of the River buses… shape with roof like an  old Thailand building architecture.

Hotel Shangrila Palace which is next to Chao Phraya  River.

One of the many piers along Chao Phraya river. 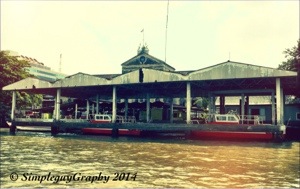 Holy Rosary Church built by the Portuguese in Samphanthawong on the bank of Chao Phraya; south of Yaowarat, Chinatown.

Interesting ride. Wanna see more? Come and follow me on my next posting on this series of ride down River Chao Phraya. =)