Hi … Just wanted to share with you my experience on running on the longest bridge in South Eat Asia last weekend; 22/Nov 2014. This is the first time it was held on this bridge as it was just open to the public in March 2014. Previous runs were held on the 1st Penang Bridge since 1985.

The Sultan Abdul Halim Muadzam Shah Bridge or Penang Second Bridge was completed on Feb 2014 and it is 24km in length (Length over water is 16.9km) and it’s main span is 250m long.

Each year, this run attracts thousands of people locally and also internationally. This year’s run saw more than 62,000 people participating in the Full Marathon, Half Marathon, 10km and also the 7km Fun Run. The races started in staggered time where the Full Marathon started as early as 1.30am. For me, I took the 10km Men run which only started at 7.30am. Yup, so the bridge was totally crowded with people from early morning. LOL!!!

Anyway.. here are some shots. Runners warming up and getting ready for the run.

While some lazying at the side while waiting for the race to start to enjoy the beautiful sunrise. 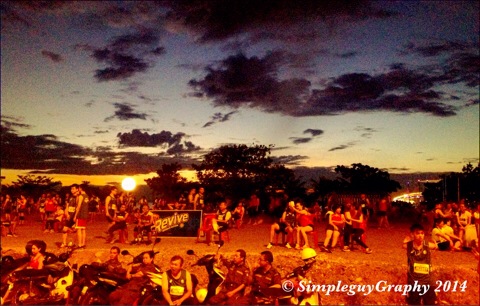 Shot of the Penang Second Bridge from the shore from the island side. 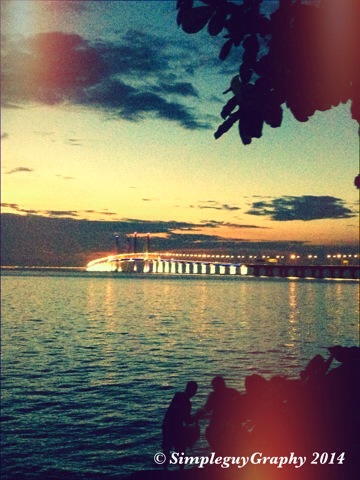 Starting point for the runners. All ladies gathering up waiting for the countdown.

Look at the crowd!! That’s just only for the ladies open. I believe the line stretches all the way back to 200m to 300m behind (or even more).

It took about 30 mins to get 99% of the ladies to cross the starting line before the men could get ready for their starting.

This was the starting for the Men’s 10km run. Yup… you can see that the sun was already up in full force. 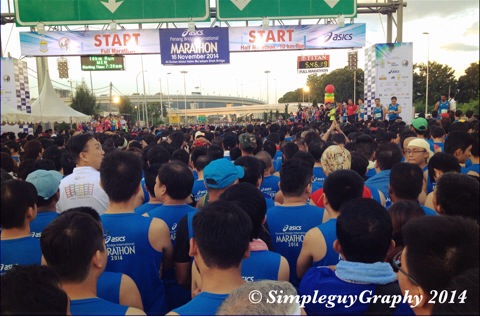 Some runners taking a slow walk to enjoy the view.

Anyway.. to cut it short. I made it within the stipulated time and I got my Medal. Kinda nice right?

Welcome back!!!!Sorry for a long break in between.

If you missed my earlier posting, please do have a look to catch up with the story. =)

The ‘flight’ has but mostly of the superman and superwoman are still on the ground…… in total of up to 2500 of supermen and superwomen. 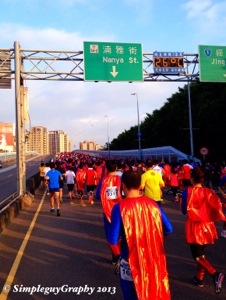 Gosh… the superheroes had even time to pose on the side of the street.

More of them coming but some of them decided to walk instead of ‘flying’. 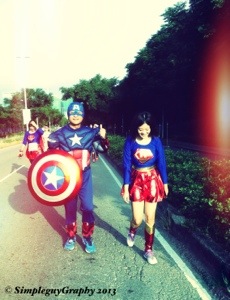 Passed along the older part of Hsinchu.

Finally arrived at the final destination. All having a break. 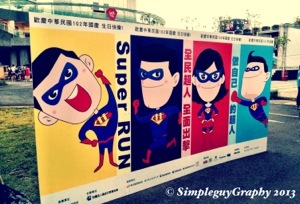 Hope you enjoy with me on this Super Run. Catch and follow me on my travel in my upcoming posting =)

Thanks for following me here for the Super Run.

Close to the ‘flying’ time, they even arranged for a warm up session for all the runners. 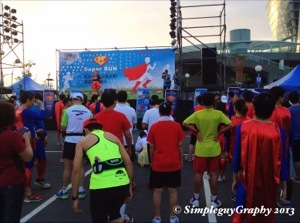 Another shot from a higher ground. 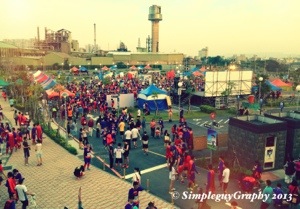 Cosplay…. Everyone want to take a photo with these 2 guys… 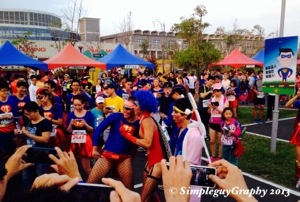 … not sure what character are they dressing up as. Do you?

Every superboy also came. Guess he will be flying in his pram. =)

Getting ready at the starting line….. 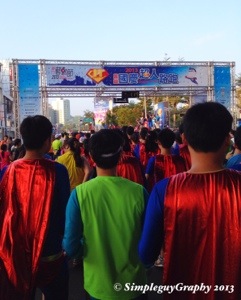 See me ‘fly’ along the route in my next posting. Stay tune.

Before I start on this posting, I would like to share with my readers that I have reached another milestone in my blogging. This is my 250th posting and also exactly 1 year from the month that blog was born. It could not have gone so far without the great support of my readers and followers which have balloon to more than 4,600 followers and close to 40,000 views. I would like to take this opportunity to say a big THANK YOU to all for this. =)

Like the title says ‘National Day Super Run’ but with a twist. Let me bring you all up to speed.

I was lucky to be in Taiwan on the week when they were celebration their National day, which falls on 10th Oct each year. In Hsinchu, the county had organized a run, mmmm… more like a fun run with the theme of Super heroes; Superman and Superwoman. And…. yes, the runners dressed up in superman and superwoman costumes.

As I only found this out at the eleventh hour, I did not managed to register but thanks to my lucky star, one of my colleagues could not make it. So I took over his place. Below is the box that they given when the runners collected their numbers and costumes; in a ‘Super Run’ box.

The booklet with the instruction and also the route of the run.

In the box… run number, booklet, and most importantly, the super costume.

The costume even come with a drape and you gotta wear your undies outside. LOL!!!

Got up at 5am and we arrive at the run area 15min later as it was a short drive from the hotel. It was held at the exhibition area where they located the Taiwan’s Shanghai Expo Pavilion.

Welcoming us at the place was the stage with the background of a cartoon with a character of ‘Superman’.

People posing at the stage to get their photos taken.

More people arriving in their super costumes (not all but close to 90% of them wore the super suits).

Even superman and superwoman had to queue up in line to use the toilet!!! HAHA!!

More on the being super…. but how super? Catch me on my next posting……..

Last weekend, I had the chance to participate in a walk organized by a local newspaper in Malaysia. It was held in Georgetown, Penang and in the heart of the Heritage trail.

This is a yearly event that the local Malaysian newspaper; The Star who organized it around this time of the year.  . This years’ response will overwhelming; the participation was more than 22,000 people of all ages and races. It consist of a competitive walk of 10km and non-competitive walk of 7km.

I went there early (very early in fact – arrived at 5.30am) so that I was able to park nearby the event area. When I arrived at the registration area, there were already quite a number people in the area.The Start and Finish was at the shopping mall in the heart of the Georgetown.

Shot taken from the 2nd floor of the shopping mall. 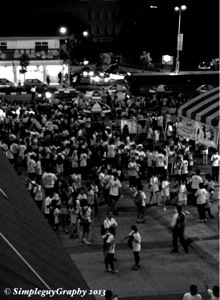 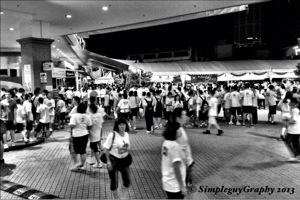 Sponsors setting up stalls for lucky dip draw for the participants before the race; Freebies!!!

… the sun is rising

Look at part of the 22k crowd heading to the Starting line.

All waiting for the the start….. 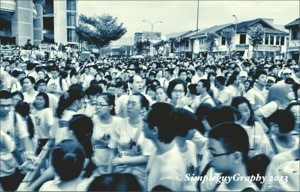 What happens after the start? Join me in the next series…. =)