Welcome back! Where were we? Oh yes… Ratchadamri Rd towards Rama 1 Rd.

On Ratchcadamri Rd, you can find the largest Central World which is the 6th largest shopping plaza and complex in the world but again, I am not into shopping. =P

Anyway, we arrived at the junction of the Ratchadamri Rd and Rama 1 Rd where you will find Erawan Shrine. It houses a statue of Phra Phrom, the Thai representation of the Hindu creation god Brahma. It is a popular tourist attraction. 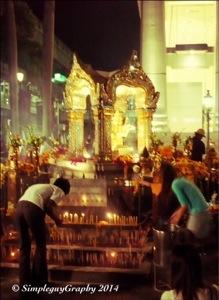 Another shot of the shrine.

Worshipers coming to pray and give offerings.

It often features performances by resident Thai dance troupes, who are hired by worshipers in return for seeing their prayers at the shrine answered as seen below.

The elevated pedestrian crossing over Ratchadamri Rd and Rama 1 as the traffic there is very heavy. 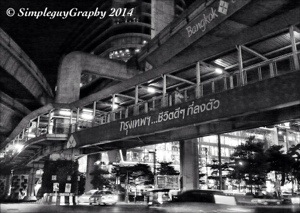 Loving it? Stay with me on my next posting. =)

Thanks for staying with me. If you are new here, welcome to my blog page. This is my 3rd series of my posting on my trip to Thaliand; Bangkok way back in 2008. If you have missed my earlier series, pls feel free to visit them and hope you enjoy reading them. =)

Ok… coming back here, this series is on my walk about in Bangkok  city literally down the street (not whole but part of Bangkok) by foot and also by MRT after my trip on Chao Phraya river cruise.

It was already evening and we took the BTS (Bangkok Mass Transit System) to Siam Center using the BTS – Sukhumvit line.

A view from the BTS Chitlom station where the Erawan Shrine is located. More on that later.

We walked around the Chitlom area and you will be surprised to see stalls along the alleys.

Aren’t they colourful? Can’t remember what are they (been too long. LOL!) 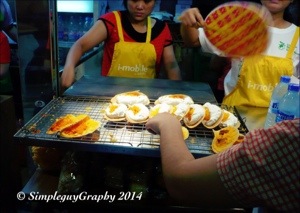 Walking back along Ratchadamri Rd on the elevated pedestrian walk.

Stayed tune for more on my series on walking down Bangkok streets.

Welcome to my last posting on my series of Bangkok; Ride down River Chao Phraya.

Still walking around the Wat Arun compound. Another angle shot of the central prang from a different entrance.

Close up show of the central prang.

Time to move on. Taking the ferry to our next ferry stop; Saphan Phut pier. A shot from the ferry overlooking Wat Arun.

It was a short ferry ride before we reach Saphan Phut pier.

Nothing much here as but you can see old buildings and the locals. There’s also a wet market here but unfortunately, it is close as the time we reached there if was already late afternoon else it will be interesting to see the locals in the market with the activities. 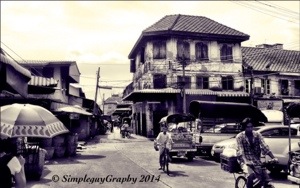 Enough for today on the river cruise down Chao Phraya river. Taking a ferry back to Sathon pier.

Saw this in the ferry; ‘Space fpr monks’

Something interesting to note. =)

Anyway, that’s the end of this series on the ride down the river Chao Phraya. Stay tune for the next series.=)

Hi!! Great to see that you are still following me. It’s been a long 7 posting journey. We are nearly at the end. Bear with me a little more. =)

Near the exit of the Wat Pho, the view of the temple.

Walking outside Wat Pho temple is the Tha Tien Pier. There is also a market at Tha Tien pier which you can see all sorts of dried food being sold. 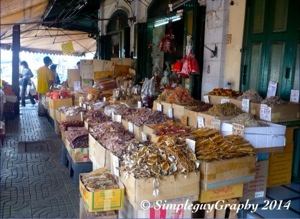 From Tha Tien Pier, we took the ferry across to the next temple crossing Chao Phraya river. What temple is that you may ask?

Well… it’s the Wat Arun Ratchawararam Ratchawaramahawihan or famously known as Wat Arun Temple. It is located at Bangkok Yai district of Bangkok, Thailand, on the Thonburi west bank of the Chao Phraya River.

Wat Arun is among the best known of Thailand’s landmarks and the first light of the morning reflects off the surface of the temple with pearly iridescence. 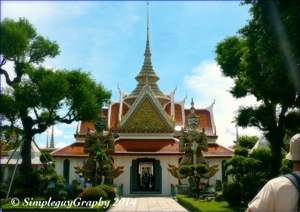 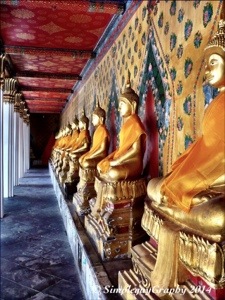 Another shot of the temple inside Wat Arun 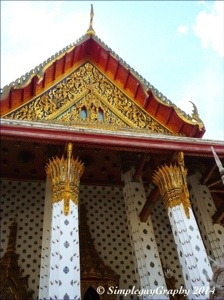 Central prangs surrounded by smaller ones. 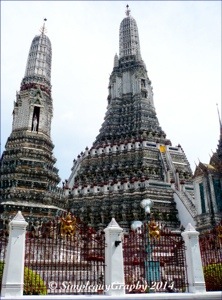 Another angle shot of the prang in Wat Arun.

We are nearing the end. So stay with me and follow me on the last posting on my series on Bangko; Ride down River Chao Phraya.

Thanks for being with here. Still walking within the compounds of Wat Pho, there are lots of beautiful architecture to enjoy and also to see the locals coming here to pray and give offering aside from the tourists (like myself) wondering around the temple.

A shot of the temple inside. Yup I would say a near perfect clear blue sky which means it was also quite hot too. 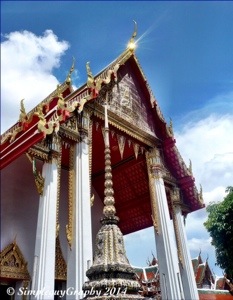 Another shot of the temple…..

Ubosot is a building in a Buddhist Wat. It is the holiest prayer room and called the “ordination hall” as it is where ordinations take place

Guess… sometimes.. words can’t describe them unless you see it with your own eyes the beauty of it.

Stone guardians standing at the gates… 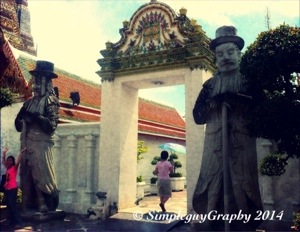 Locals offering their prays in the temple.

Stay tune for the next posting on this series. =)

Thanks for following me this far. We are more than half way through my series; Thailand – Bangkok; Ride down River Chao Phraya.

One of the buildings close to the Grand Palace. Not sure what building is this. Anyone knows? 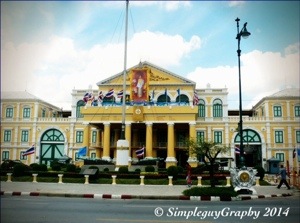 Anyway.. let head inside of Wat Pho. It is a Buddhist temple in Phra Nakhon district, Bangkok, Thailand. Located in the Rattanakosin district directly adjacent to the Grand Palace. It is also known also as the Temple of the Reclining Buddha, where it’s official name is Wat Phra Chettuphon Wimon Mangkhlaram Ratchaworamahawihan. I also got to know that the temple is the birthplace for traditional Thai Massage. =O

Some shots taken inside the Wat; Chedis from far.

Lovely architecture; close up of the chedis 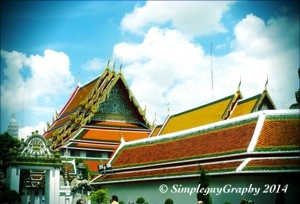 More? Sure. Just stay tune for the next posting. Remember… we are just only slightly half way through this series only. =)