Hi there!! Indians in Malaysia or can I say, Indians around the world will be celebrating Diwali (or called Deepavali in some places) tomorrow. It is one of the celebration in Malaysia aside from Chinese New Year and Hari Raya Puasa (for the Muslims). It is also an officially holiday in Malaysia and Singapore.

Diwali or also called as ‘Festival of Lights’ which translates into “row of lamps”.It involves the lighting of small clay lamps filled with oil to signify the triumph of good over evil.They are kept on during the night and one’s house is cleaned, both done in order to make the Hindu Goddess of Prosperity, Lakshmi feel welcome. Firecrackers are played as it is believed that it drives away evil spirit. During Diwali, Indians will wear new clothes and share sweets and snacks with family members and friends. 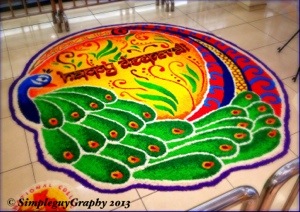 What is Kolam or Rangoli? Kolam means ‘beauty’ and are actually floor drawing using coloured rice powder and are used for ornamental or ceremonial design during Indian festivals. 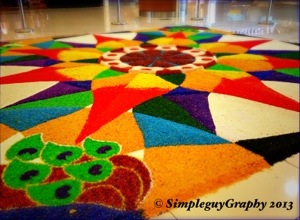 Traditionally, kolams are widely practiced by female Indian community worldwide to represent responsibilities of the women to maintain her household as well as to train them to be a good housekeeper.

Kolam is a geometrical line drawing composed of curved shapes and dots of rice flour are placed in a grid pattern framework.  Apart from geometrical shapes, it also incorporates motifs like animals, fruit and flowers. Aside from rice powder, other ingredients also can be used which includes beads, shell, salt, fruits and vegetables. 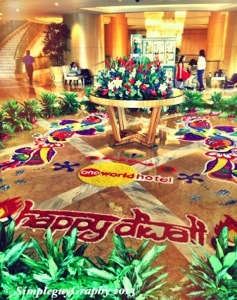 Here’s wishing all my readers who are celebrating this festival a Happy Diwali!!

29 thoughts on “Malaysia – Happy Diwali …. A Celebration of Light”